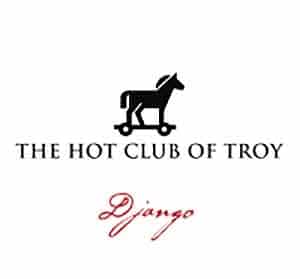 March 17th at The Whidbey Island Center for the Arts, Langley, Washington

Tickets are on sale now. 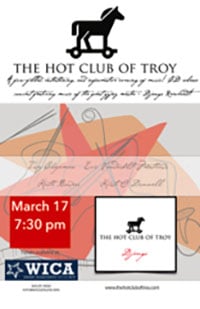 The Hot Club Of Troy is excited to announce their upcoming live performance at The Whidbey Island Center for the Arts, Friday March 17, 2017 in celebration of the completion of the group’s first CD release “Django”.

“Django” celebrates the legendary gypsy guitarist Django Reinhardt, as one history’s greatest jazz musicians, and as an excellent composer as well. All of the songs on this CD are original compositions by the Django himself. A showcase for the vast variety of composition of the great gypsy master, along with Troy Chapman’s guitar, “Django” also features incredible performances on piano, clarinet and saxophone by rising master multi-instrumentalist, and Whidbey Island, WA native, Eric Vanderbilt-Mathews.

The concert and the CD both feature an outstanding group of Whidbey Island musicians:

Guitarist, and The Hot Club of Troy founder, Troy Chapman, was formerly a member of the legendary NW gypsy jazz band Pearl Django, and founder of the local gypsy jazz group Billet-Deux. Chapman has released numerous recordings with Pearl Django and Billet-Deux as well “Time and the Hours” a CD of original compositions, and “Evans Hall” a tribute to jazz legends Bill Evans and Jim Hall.

Multi-instrumentalist and South Whidbey Island native Eric Vanderbilt-Mathews displays world-class jazz talent on piano and clarinet, alto and tenor saxophones. One of the finest musical talents to emerge from Whidbey Island and the Pacific Northwest, Vanderbilt-Mathews is a 2010 graduate of South Whidbey High School and the 2010 winner of the Outstanding Soloist award at the Lionel Hampton Jazz Festival. A dean’s list recipient at the University of Washington, Eric earned his Bachelor of Music Jazz Studies and Biology Degrees 2010-2015.

Guitarist Keith Bowers brings his exceptional skills to The Hot Club of Troy as well as leading Whidbey Island’s favorite American Swing ensemble “Trio Nouveau”. Bowers has released numerous CDs with Trio Nouveau and under his own name.

Bassist Kristi O’Donnell brings her grooving low-end bass lines into the Hot Club of Troy after years of experience playing with Trio Nouveau, Café Impromptu and the bluegrass group Swords into Plowshares.

Concertgoers can expect a broad selection of music all painted with composer Django Reinhardt’s idiosyncratic gypsy melodic brush. Joyful up-tempo swing will mix with soulful gypsy ballads and the blistering tempos of some of Django’s most imaginative pieces. The song selection combined with the formidable improvisational talents of all the players should make for an evening that will range from exciting to soothing and all points in-between. The Hot Club of Troy is also known for their informative and entertaining presentation of the story of Django Reinhardt, his life, and his music during the show. Expect a highly satisfying and entertaining evening of some of the 20th century’s best music!

The Whidbey Island Center for the Arts