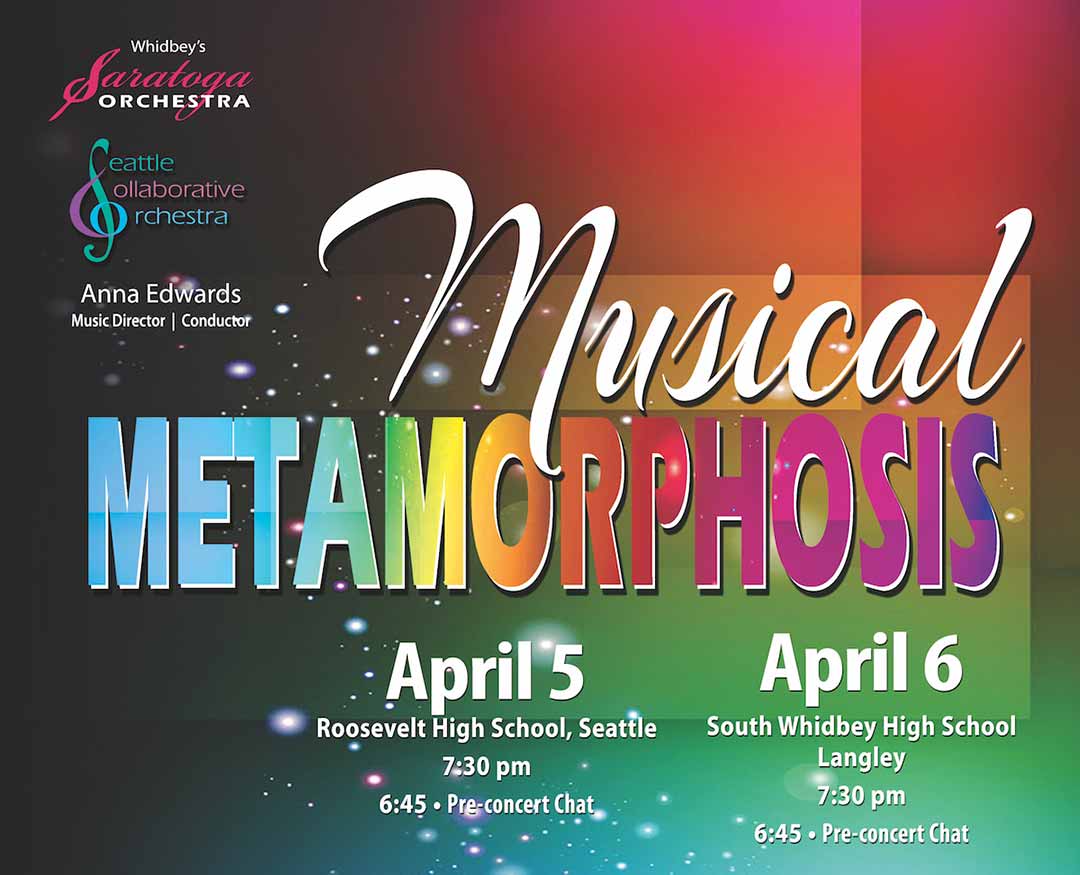 Join us for a special musical venture as Whidbey’s Saratoga Orchestra and Seattle Collaborative Orchestra, both under the direction of Anna Edwards, present a program of works inspired by others—metamorphosing from the original into something new.

The first movement of Rimsky-Korsakov’s epic tale “Scheherazade”, after which the ensemble will present the world premiere of Leanna Primiani’s “1001” as a modern musical response to Scheherazade—this time from her perspective.

Paul Hindemith’s “Symphonic Metamorphosis”—the first work he wrote in the United States after being banned by Nazis in his homeland of Germany, is based on themes by composer Carl Maria von Weber.

A highlight of the evening will be a celebratory performance of Seattle’s own Walt Wagner’s “The Miracle Concerto”—in honor of the 25th anniversary of the commissioning. Internationally acclaimed pianist Mark Salman will be the featured soloist.

The pre-concert chat will be moderated by Classical KING-FM radio hosts Lisa Bergman (4/5) and Dave Beck (4/6).

Mark Salman’s performances have been described as “powerful,” “astonishing, exacting and evocative,” “dramatic,” “wildly imaginative,” and “touchingly lyrical.” Mr. Salman’s career has taken him to Europe, Asia, Canada, and throughout the United States. He has performed in Carnegie Hall and Alice Tully Hall in New York City, has been the subject of profiles in The New York Times, and has been featured in numerous radio and television broadcasts in the U.S., Europe, and China.

Saratoga Orchestra of Whidbey Island was formed as an expansion of the Saratoga Chamber Players founded by Whidbey Island’s legendary violinist and arts supporter, Michael Nutt. In 2007, Legh W. Burns, Music Director Emeritus, began a regular concert series performing throughout the island for Whidbey audiences. Anna Edwards has led the orchestra as Music Director since 2015, and has brought national attention to the ensemble for its innovative programming, especially championing women composers.

The Seattle Collaborative Orchestra (SCO) is a diverse, multigenerational performing arts organization dedicated to promoting diversity in symphonic classical music. SCO musicians include students, community members, and professionals who work together to create a unique and collaborative musical experience that represents a creative mix of traditional orchestral music, works by female composers, and composers of color. Professional musicians of the SCO come from Skyros String Quartet, Seattle Symphony Orchestra, and Pacific Northwest Ballet.