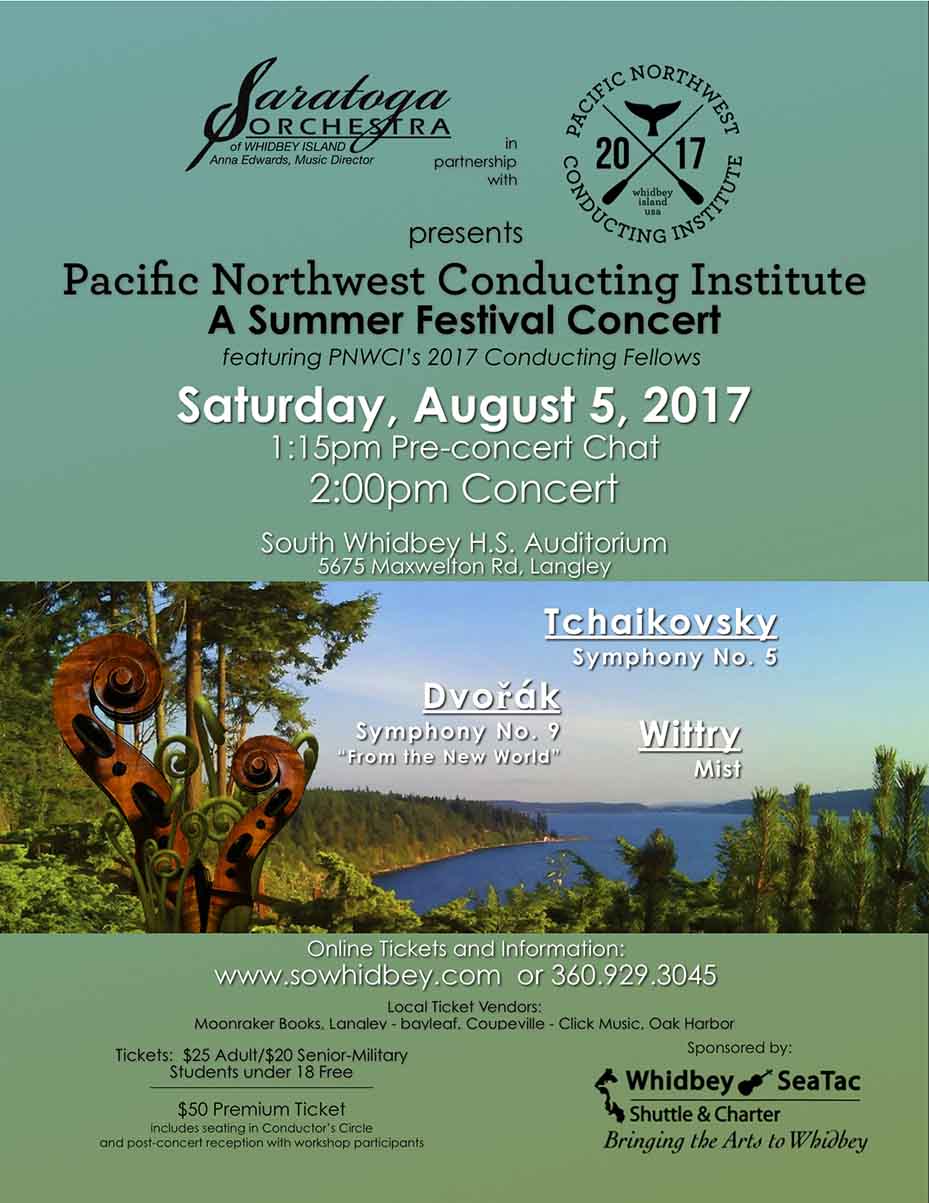 Saratoga Orchestra of Whidbey Island, in partnership with Pacific Northwest Conducting Institute, presents A Summer Festival Concert on Saturday, August 5, 2pm at South Whidbey High School Auditorium.  Orchestra conductors from across the country will participate in the six-day PNWCI workshop, refining and learning conducting techniques from internationally acclaimed conductor and composer, Diane Wittry.  The workshop’s culmination will feature the PNWCI’s 2017 Conducting Fellows leading the orchestra in a program to include Dvorak’s Symphony No. 9 “From the New World”, Wittry’s own composition entitled, “Mist”, and Tchaikovsky’s Symphony No. 5. A pre-concert chat will begin at 1:15pm.

Maestra Diane Wittry maintains a dual career as a music director and guest conductor throughout the world and has led performances by, among others, The Los Angeles Philharmonic, the Buffalo Philharmonic, Florida Philharmonic Orchestra, and the symphony orchestras of Milwaukee, San Diego, Houston, Sarajevo Philharmonic in Bosnia, the National Symphony Orchestra of Ukraine, Russia’s Maikop and Sochi symphony orchestras, Italy’s Sinfonia Dell’Arte di Firenze, and Japan’s Osaka Symphony Orchestra. Wittry has been a guest lecturer at the Juilliard School, the Manhattan School of Music, the Curtis Institute of Music, as well as other Universities and Colleges, and is a frequent guest speaker at national conferences such as the League of American Orchestras and the Conductor’s Guild.

General Admission tickets are $25/Adult and $20/Senior-Military. Students under 18 admitted free. Premium Seating tickets are available online for $50 and includes seating in the Conductor’s Circle and a post-concert reception with the participants. General Admission tickets are available at Moonraker Books-Langley, bayleaf-Coupeville, and Click Music-Oak Harbor and online. Cash/check/CC accepted at the door. For workshop, concert information and online tickets, please visit www.sowhidbey.com or call 360-929-3045.