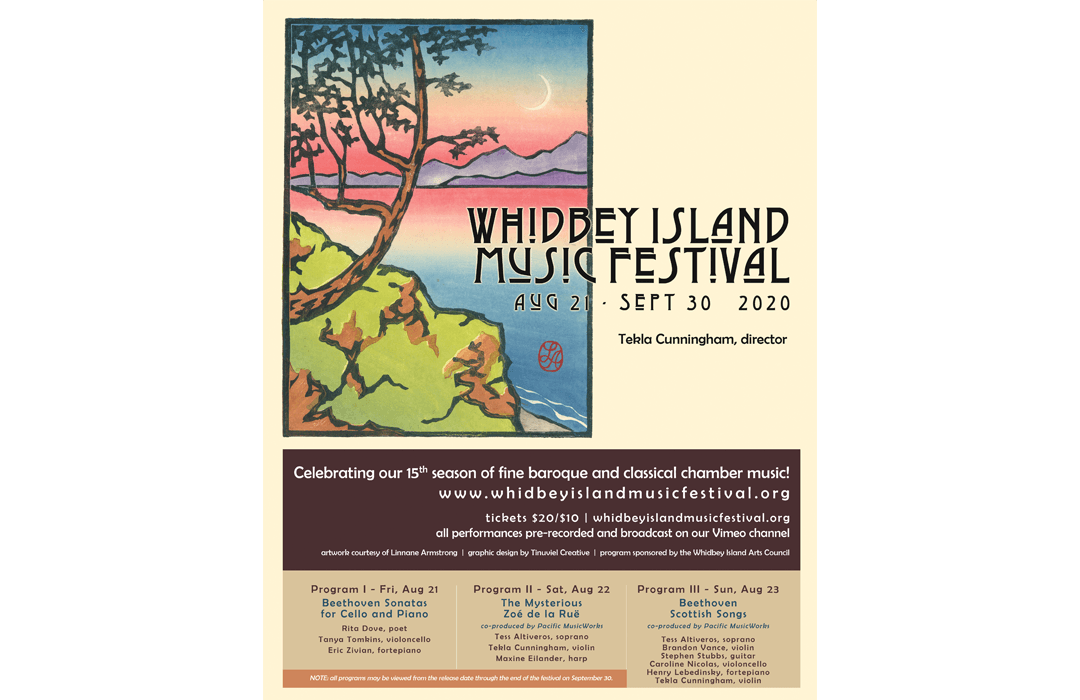 In celebration of the 15th anniversary season of the Whidbey Island Music Festival and the occasion of Beethoven’s 250th birth year WIMF presents three virtual concert experiences to enjoy from the comfort and safety of your home. These programs will be available on Vimeo for you to watch whenever is most convenient for you. Your ticket purchase will include an invite to a Zoom pre-concert chat on “Opening Night” with festival artists. These programs will be available online until September 30, 2020.

The Whidbey Island Music Festival is a beloved annual event that presents great performances of baroque and classical chamber music in relaxed and intimate venues on beautiful Whidbey Island, with repertoire this summer from Rennaisance England to 19th century Vienna. We bring music of the past four centuries to life with vivid and moving concert performances on period instruments. 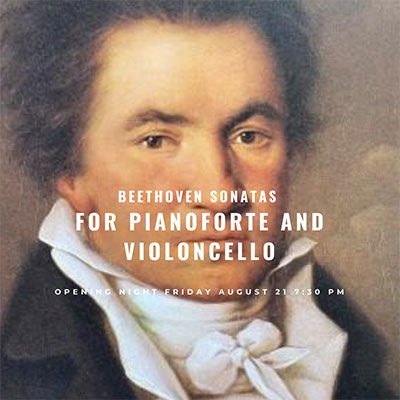 Fortepianist Eric Zivian has taken up the challenge of learning all 32 Beethoven sonatas for Beethoven’s 250th anniversary year, a time-consuming project he can finally take on while sheltered in place. As a feat of endurance, it’s a challenge not unlike hiking the Pacific Crest Trail. It is also a wonderful opportunity for the player and listener to explore the full range of Beethoven’s style, and the emotion, humor, and spirituality of these treasures. For the Whidbey Island Music Festival, we are curating a selection of Beethoven’s genre-defining works for fortepiano and cello. Former US Poet Laureate Rita Dove will read her poem “Ludwig Van Beethoven's Return to Vienna”.

Over the course of the cycle, Zivian will use two different Viennese fortepianos corresponding with the changing sound world during Beethoven’s lifetime, from a smaller, more percussive Poletti (copy of Dulcken, 1795) for the earlier sonatas, to an original 1841 Rausch for the later sonatas.

This program is a co-production with Pacific MusicWorks

In the second half of the 18th century, beginning with Marie Antoinette, Europe experienced a strong fashion for women playing the harp. The composer

most closely associated with Marie in her native Vienna, was Christoph Willibald Gluck whose Orfeo of 1762, also placed the harp in the mythological context of Orfeo’s lyre. Later, as the Queen of France, she opened the door for Gluck’s later triumphs on the operatic stage in Paris, while at the same time creating the iconic image of the female harpist. The imposing figure of Zoé de la Rüe has remained shrouded in mystery, and is virtually unknown today, even amongst harpists and scholars of the historical harp. She

was a celebrated harpist during her lifetime, and wrote many sonatas for solo harp, harp and violin, as well as a set of three French songs. In an era when much fashionable music was light and ephemeral, her music aims at deeper human emotions - closer to Beethoven than to Offenbach. Spohr’s glorious arrangement of “Ach, ich fühls” from Mozart’s Magic Flute introduces a program of Zoë de la Rue’s sonatas for violin and harp as well as a selection of her songs. 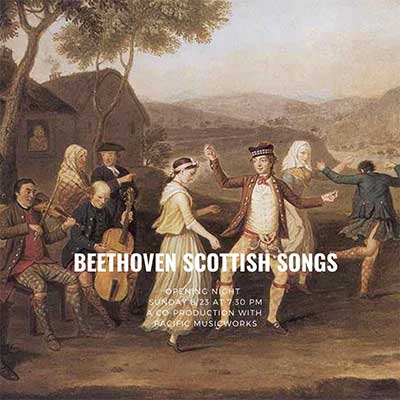 This program is a co-production with Pacific MusicWorks

The 18th and 19th centuries saw a surge of interest in the music and culture of Scotland and Ireland. Many European composers made settings of Scottish folk tunes both to capitalize on the market for music making at home and to investigate the music of what mainland Europeans perceive to be the “wild west” of the time.

In writing his Scottish songs, Beethoven set his pieces to English texts rather than the original Gaelic. This program combines Beethoven’s art-song versions with sets of traditional Scottish fiddle tunes, in a joyful celebration of Scotland’s rich musical heritage!