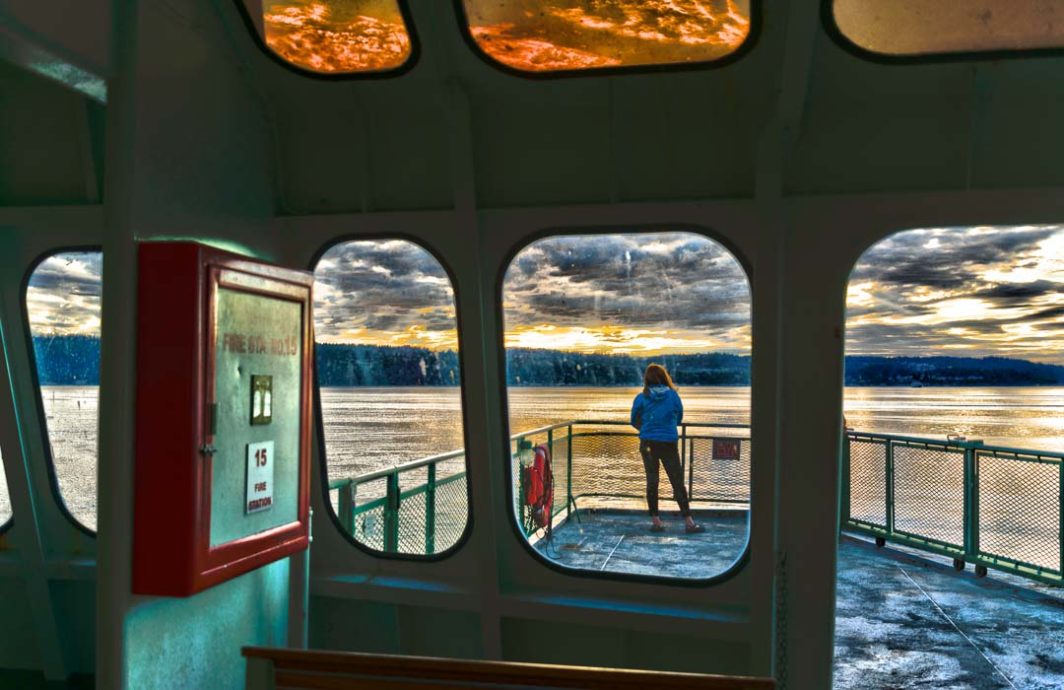 Riding the ferry is old hat for many, but for those who stop to look, they’ll get a wonderful reminder of how beautiful this region is.

As someone who lives on Whidbey Island, I’ve learned that time on the ferry is something to value. But, unlike visitors who head topside to the see the view, I think many of us don’t value it enough. Daily commuters almost never get out of their cars, and those who walk on often stare at their phones and clutch their coffee. And I confess that, like others, I’ve occasionally found a way to sneak a short nap in during the loading and crossing.

I’ve seen people post tweets and photos about the ferry and their beautiful commute, and they’re right, of course, but for some trips that seems like an sadly colorless description.

The ferry is a wonderful platform for great views, such as this of Mukilteo north of the ferry terminal.

One such trip happened recently. Summertime clouds were invading the evening sky. We sailed west. The clouds drifted east. I chose to forgo my nap, and, instead, grab my camera, and play tourist.

It was just after 8 p.m. and in late June that means dusk was still an hour or so away. I was one of several people outside watching the play of light or taking pictures.

I’d like to write that the sun and clouds were spectacular beyond belief. They weren’t. But, they did have drama. Thunderheads that promised much, but ultimately delivered nothing, were bright white against the darkening sky. Clouds overhead were backlit, forming dark dots that hid the sun.

The people out on deck stood quietly for long periods of time, talking quietly with a friend or just staring out toward Whidbey. They were silhouettes against the sky. The only breeze was from the ferry whisking us to Whidbey through the salt-sea air. The long day’s stress was also blowing away.

I thought of the people in their cars and wondered if they were seeing any of this. They had their beautiful commute, but they could have had more.