Washington State University’s Extension Program offers occasional classes on Whidbey Island. The latest was by their Bread Lab, which attracts chefs from all over the world.

Class is in Session

There’s a gastro-academic treasure taking hold in the northern part of the Puget Sound, and, when part of it came to Whidbey Island, my wife and I got the chance to go.

In Mt. Vernon, Washington State University has something called “The Bread Lab.”  There, chefs from as far away as Italy have come to work alongside the Lab chefs, experimenting on one of the world’s oldest foods, a food that is as much heritage as it is yeast, as much myth as it is mixing and after thousands of years and trillions and trillions of loaves, buns, flats and whatever, is still the subject of debate and passion.

Read how you can get an art education and a vacation at the same time. 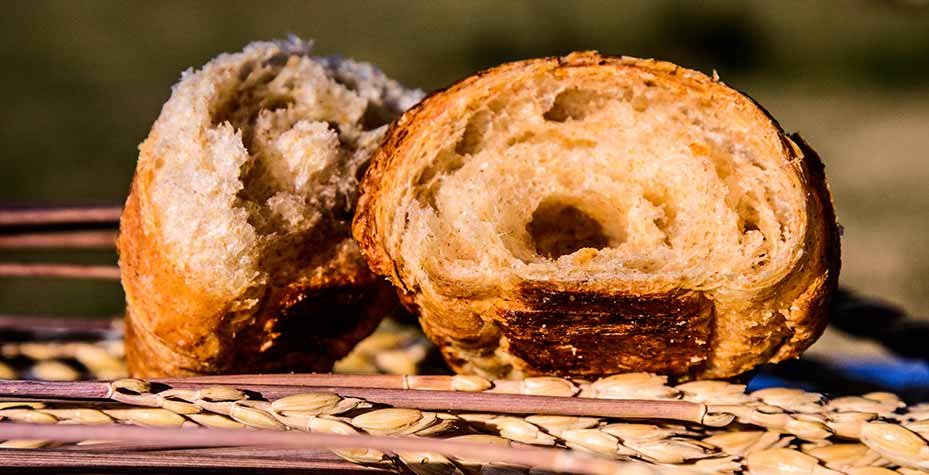 Whole grain treats from Tree-Top Bakery rest atop whole grains at the “Whole Grains for the Home Baker” conference on Whidbey Island.

The lab, along with WSU’s extension program, offered a two-day class on Whidbey on whole grain bread for the home baker. Despite the fact neither of us baked, it was something that intrigued us. Actually, it intrigued many people as the class for about 60 sold out quickly, and there was a waiting list. Without much advertising, the class drew people from 35 cities over 5 states and a Canadian Province.

My wife and I have taken cooking classes from Manhattan to Mexico to Phoenix and Seattle. Yet, we knew going in this was no “show-school.“ The academics here were serious about their work and this would be serious school. Yes, there would be pizza, pastries and muffins from a Seattle chef, but it would be serious… mostly.

“In 1890, 90 percent of the bread in this country was made at home”, Dr. Stephen Jones of the Bread Lab told us in his opening remarks. He said that by 1930, only 40 years later, 90 percent of the bread in this country came from factories. He suggested that if we look at the ingredients on a factory loaf bag we would find 25 or so ingredients in that bread and added, “You don’t need 21 of them.”

“We started the bread lab,” he explained, “Because we wanted to make real bread…We wanted to understand the process from seed to loaf.” He told us of a James Beard Award-winning chef from Italy who came to the lab and learned how an old strain of wheat made whole-grain pasta that meets his assiduous standard of excellence.

He told us they had 40,000 different strains of wheat and could make bread purple or black. “We can do that.”

While Jones set the stage, our instructor, Jonathan Bethony, would be our guide through the afternoon and next morning. A former commercial baker, Bethony was now part of the lab and would be bringing us the “take-home” lessons the lab has learned.

As he worked, we all took notes. And did we take notes. From tips cribbed in the margins around recipes handed out at the start of class, to organized notebooks, the class wrote down as much as they could. Pages filled rapidly with notes on everything from dough starter to folding to filling a pan.

For the starter, all components came naturally from the grain, itself. Ground into flour he used an equal ratio of flour to tap water and waited a week. I think he started to explain about pH balance over time, but instead kindly saved us from the science and simply said, “the yeast and the bacteria sit down and work it out.”

Of kneading the bread, he was all in favor of doing it by hand saying it was, “kind of like giving a really nice massage. If you use an electric dough mixer…you don’t know what’s happening.”

Of folding the dough, he pulled it out by hand, folded it over one-third of the way and did that again to the other end of the dough.

He stored the dough in a wicker basket to let it proof overnight in a refrigerator, but would get it out a couple of hours before our second day of class to let it “wake-up”

But, more than technique, what stuck with me was the idea that using local wheat that was ground into flour by a local mill would give us a shot at making a really good-tasting healthy bread or pasta at home.

Steve Lyon of the Washington State University bread lab takes students back to basics, showing off the types of grains used in baking.

That led some of us out into the field to see how it all begins. There Steve Lyon showed us what they were test-growing this year on Whidbey Island. There were stalks with large kernels and others that were more like small grass seeds. He started up a small combine and harvested a few rows, letting us see the process and taste the kernels. Then, he carefully noted the harvest information for the scientists at the Bread Lab.

The rest got a hands-on lesson on making whole-wheat pizza dough from Reid Schwarz of Oak Harbor’s Hot Rock Pizza. They then got to eat their lesson. I’m glad my wife saved some for me.

Schwarz was not the only local business to pitch in. At the start of day 2 of class, we were greeted with pastries from Tree-Top Baking’s Gerry Betz and Larry Lowary. In addition to taking the class, they had gotten up at 2 a.m. to create fresh pastries made from some of the very whole grains we were looking at during day 1.

Day 2 brought us a guest speaker, Wendy Scherer, head baker for Seattle’s Tom Douglas restaurants. She demonstrated making whole grain scones made from Edison wheat. Her tips were to use buttermilk, don’t add the fruit before mixing, but don’t over-mix before adding the fruit.

Bethony was then ready for the grand finale, the loaves of bread. If you had been expecting a dozen perfect and perfectly-matched loaves of bread, grandly presented, you would have been disappointed. This is a lab, after all, and even in front of an audience Bethony couldn’t resist messing up a couple just to show the effects of various techniques.

We ended our class as expected, munching on bread and scones and chatting about technique. As we left, Bethony was still baking.  There was dough left over and he had another experiment in mind.

So, what about that starter from day one? My wife was able to talk Bethony into giving us some in a take-home plastic glass where, so-far, it’s been the star of some really great whole grain Sunday morning pancakes. Bread remains on the “to-do” list, but we continue to nurture the starter and pore over our notes. However, somehow I think that idea of hand kneading the dough, well… now, where is that dough hook?