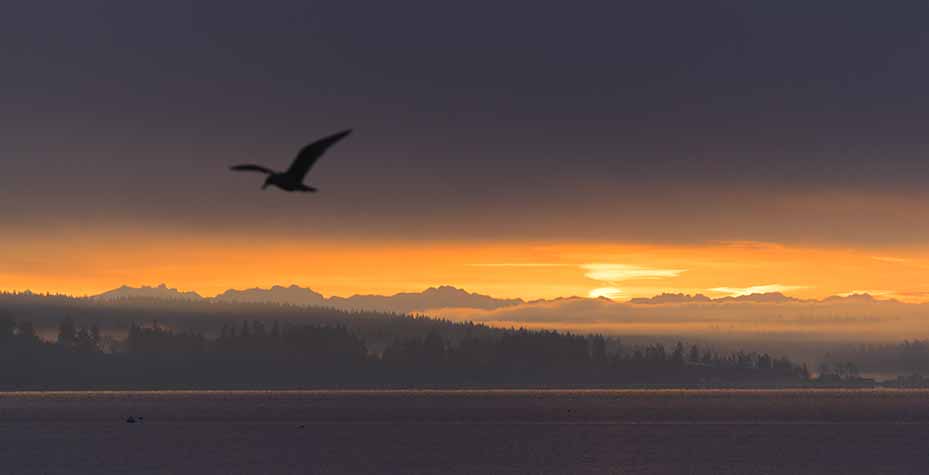 Double Bluff Beach New Year’s morning was a perfect time to encounter nature, even if nature was ready to mess with me a bit.

Midnight is kind of a lousy time to be out mid-winter.  Sunrise of the first day of the new year is, in my mind, much better.

Double Bluff Beach had its usual morning rowdies, gulls and crows. A heron, from my angle as large as a medium-sized dog, stood driftwood motionless next to a puddle.

The day promised to be gray, but as is common around here, gray is often punctuated right at sunrise or sunset when the sun reaches just above the horizon.

The one gull in particular was photo-bombing my sunrise “art.” He showed moments after I set up and circled back and forth right between the sunrise and my camera.

If it had been a person, I would have been frustrated, and would have likely given up, surrendering to someone’s idea of “fun” at my expense.

But, a bird became an opportunity to “add some depth.” So I composed myself (and my shot) towards the new day and waited for my friend’s bombing run. It took only moments before my own personal New Year’s rowdy came screaming through. Several rapid-fire clicks and we both were done.

To Get to Double Bluff Beach…

Take SR 525 to the corner of Double Bluff Road, about 1 mile south of Freeland. Turn south and travel approximately 1.8 miles. The road dead-ends in a small public parking lot. Admission is free for the Island County-owned park.
Cyclists, the road is essentially flat, making this easy bicycle access.