Life on Whidbey Island is rather idyllic; drives along scenic coastal routes or through rolling farmlands speak to peaceful days. Surprisingly, Whidbey is also an island of contrasts. With almost 20,000 military and civilian personnel and family members supporting Naval Air Station, Whidbey Island in Oak Harbor, Whidbey Island has long been viewed as a key defense site.

The island's military history runs just as deep as the history of the quaint settlements by pioneers and explorers looking to make Whidbey home.

Ft. Casey under construction with much of the work done by hand.

In 1890, construction of Fort Casey, the last fort of its kind began on the bluffs west of Coupeville. As part of a three-fort defense system, the fort was built by the U.S. Army to protect the entrance to Puget Sound.

Along with Fort Casey, the other two forts – Fort Flagler and Fort Worden on the Olympic Peninsula – made up the "Triangle of Fire;" Fort Casey was best known for its 10-inch disappearing guns that sat high above the head of Admiralty Inlet.

Four hundred troops eventually manned the fort after its opening in 1901, however they never fired the guns, which could lob shells more than 10 miles, in warfare. In 20 short years, the fort had become the fourth largest military post and undoubtedly the most beautiful.

With the military’s use of aircraft the disappearing guns became obsolete and the fort was later decommissioned. During World War II, the guns were removed and melted down for their metal; however, similar guns brought in from the Philippines were reinstalled when Fort Casey became a state park in the 1950's. 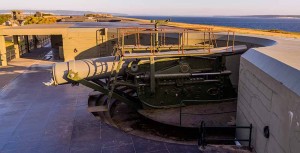 This cannon is in the lowered position, hiding behind the fort's wall, which is embedded in the hillside. The gun is raised to fire.

Today the fort is open to the public. Visitors can climb on the ladders to inspect the guns, and walk along bluff-side bunkers and through the dark tunnels that seem to carry the echoing voices of the past. The original officers quarters and bunkhouses, now owned by Seattle Pacific University, remain on the grounds as a conference center.

Fort Ebey, just north of Fort Casey, was built in 1942-43 to help protect Puget Sound military bases from the Japanese Imperial Navy. Battery 248 was in a perfect position for gun emplacements and provided an important radar site. Six-inch guns were installed to help defend ships heading toward Deception Pass, although no enemy ships ever entered the Sound. Ft. Ebey was decommissioned shortly after the war but remained a place to conduct training. Efforts to prepare the fort as a state park began in 1965.

Just prior to the U.S.'s involvement in World War II, the Office of Chief Naval Operations charged the local naval district with finding the perfect location to re-arm and refuel planes defending the Northwest. Among five contenders, Crescent Harbor in Oak Harbor was chosen as the spot because PBY seaplane takeoffs and landings would be a breeze.

After Dec. 7, 1941, Pearl Harbor's attack set off the construction frenzy with almost 200 men working through all weather conditions to finish the base. Farmers even turned over titles to ancestral farmlands so that runways and hangars could be built. 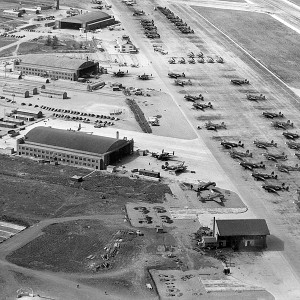 NASWI was commissioned Sept. 21, 1942 as a base for seaplane patrol operations, rocket firing training, torpedo overhaul, and both recruit and petty officer training. It was later named Ault Field in memory of Cdr. William B. Ault, who went missing in action in the Battle of the Coral Sea.

The first planes to arrive were the F4F Wildcats, replaced that same year by the F6F Hellcats. Along came the PV-1 Venturas, SBD Dauntless dive-bombers and the rest is history.

Aircraft and crews from Whidbey have participated in the Korean Conflict, the Vietnam War and Desert Storm. Since the early 1960s, the Naval Air Station has been primarily an attack/electronic warfare base, best known for the arrival of the Grumman EA-6B Prowler in the '70s.

In 2008, the EA-18G Growler, the newest tool in the Navy's airborne electronic attack fleet, built by The Boeing Company, arrived on Whidbey, ushering in a welcomed new age of training and operations on the base. 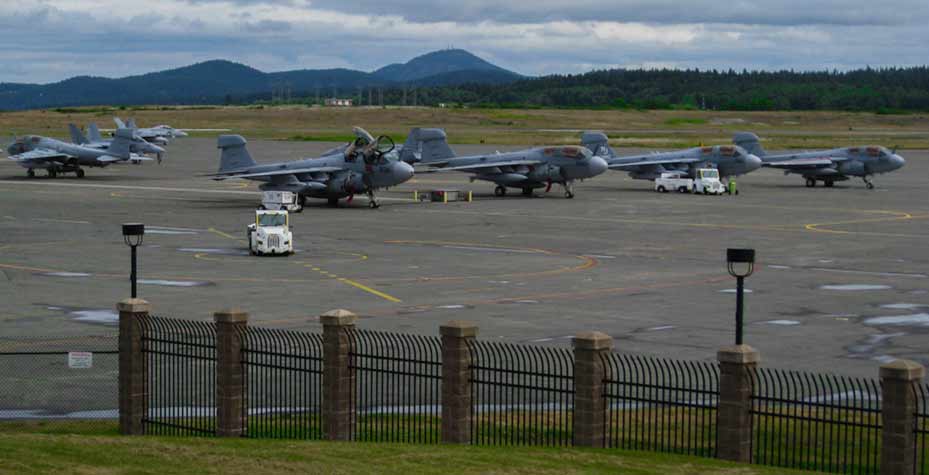 The Outlying Field south of Coupeville was built as a place to simulate touch-and-go landings and takeoffs from seagoing aircraft carriers.

Today, during regular training, Navy jets can be seen circling above Coupeville and Oak Harbor; the most exciting viewing spot is alongside Highway 20 at the Outlying Field where planes practice these touch-and-go maneuvers.

The PBYMF Naval Air Museum  is now open to the public in downtown Oak Harbor with a PBY Catalina on display across the street.

To see a video about the museum and to learn more, visit here on our website.