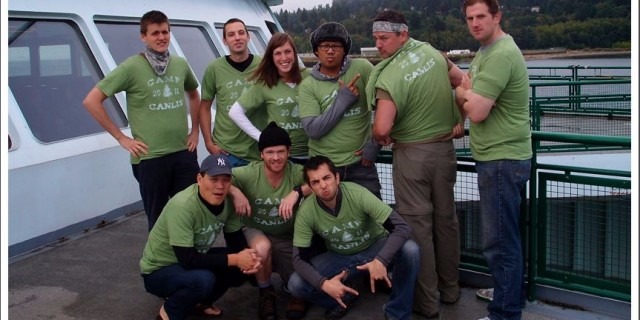 Note:  This was originally posted to the Camp Casey Conference Center and is reprinted by permission.

Merriam-Webster’s dictionary defines camping as “a place usually away from urban areas where tents or simple buildings (as cabins) are erected for shelter or for temporary residence.”  Everyone’s idea of camping is a little different. At SPU’s Camp Casey Conference Center, we offer a varied camping experience that offers the Fire Hall, Alumni House, BOQ, semi-private Company Quarters, Barracks, and 25 campsites. Each campsite comes with water, electricity, picnic table, and fire ring.

When the leadership team from Seattle’s own Canlis Restaurant was looking for a location for their retreat, they had something specific in mind. Their criteria was that the venue be a short drive away, surrounded by forest, and conducive to building community. They also wanted to be able to take meals together and have lots of open space to play their favorite outdoor activity, laser tag. It was no surprise to us that they selected our sister property, Fort Casey Inn. The Inn is the former non-commissioned officers’ quarters, circa 1909 – part of the original Fort Casey.  The 20 key managers of the Canlis team, including fourth generation owners Mark and Brian Canlis, rented six of the two-bedroom houses. Each house has a living area, upstairs bath, and farm kitchen accommodations – perfect for their evening meal preparations.

Mark officially joined Canlis in 2003 after he had graduated from Cornell University, served as a captain in Air Force Special Operations, and worked in nearly a dozen restaurants across the country. Brian says he and his brother were on a mountain-biking trip when Mark approached him about coming back to Seattle to join the business. He returned in 2005 after 12 years of studying and working abroad. Brian also attended Cornell University and was a commissioned Air Force officer.

What we’re they looking for when they selected the Fort Casey Inn for their retreat? An adventure. The retreat also provided for the power of building intimacy and sharing personal stories. A big fan of the book, Speed of Trust by Stephen Covey, he believes the more trust and intimacy is established, the higher the performance.  So what exactly did that look like for their retreat? Playing games in the forest. The team loves laser tag. They used Garrison Hall for their meetings and in the afternoon donned their face paint and played 10-on-10 at the fort. This was followed by more meetings. Evenings were spent cooking and grilling, camp fires, eating s’mores, and time on the beach.

So if your definition of camping doesn’t involve a tent, perhaps the Inn is the perfect solution and is located next door to Fort Casey State Park with its bunkers, lighthouse, 10-inch disappearing guns, public beaches, and trails. Spectacular views of the Straits of Juan de Fuca, Olympic Mountains, Cascade Mountains, and the San Juan Islands are within walking distance. As far as laser tag conditions – we’ll let you decide!