The problem was, the thing looked like it belonged there — a tiny Wonderland door sitting on a branch in a tree. Its happy-bright lacquered cartoon colors stood out against the somber blacks and browns of the tree. A tiny ladder with orange steps dangled off into space.

Moments like this just sometimes happen on this island. I guess this was my turn. I was walking the trail just north of Admiralty Head Lighthouse. It was a cloudy Sunday where nature’s clouds were a scrim, diffusing the sunlight and shushing color.

Half a dozen steps down the trail. Off the trail to my right a couple more. Whimsy, sure. Colors, designed to attract. Built, imperfectly–lintel cracked. Stairs, going where? Freshly painted, yet scratched.

I looked around to see who was watching. “A set-up,” I thought. No suspects.

This caprice had me inventing tales.
“A ‘Wonderland Door?’” Too small for a rabbit, much less Alice.
“A ‘Hobbit Door?’” Seriously, too small.
“ A ‘Fairy Door?’”
“A Doll House?”
No lock on the door. No golden key necessary. 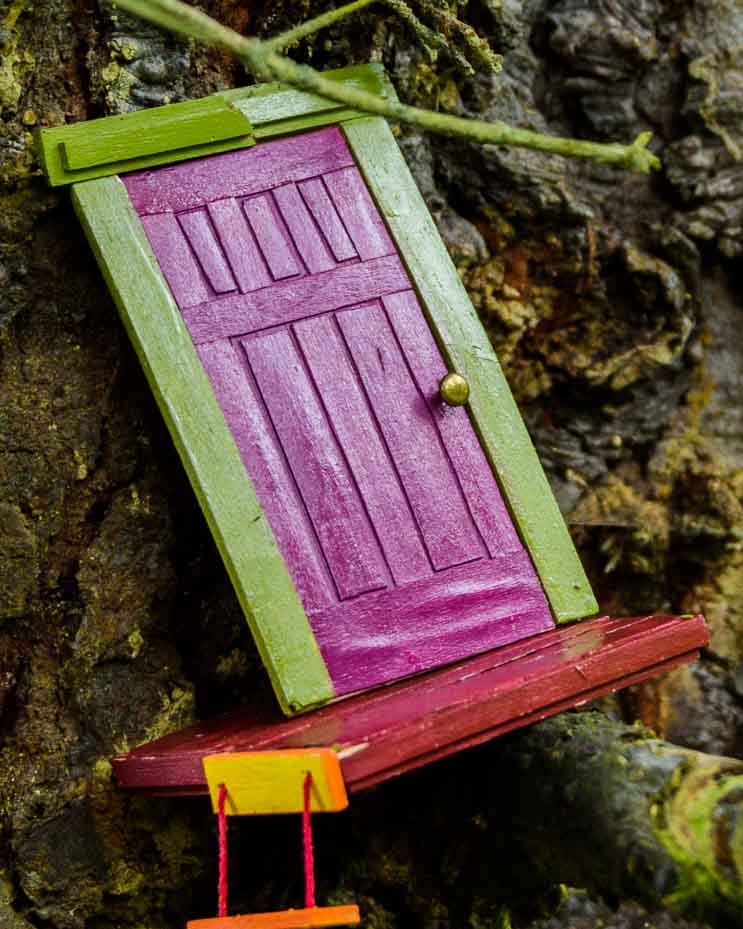 A tiny wooden door, crafted in great detail, sits on a branch.

Look for more suspects. Widen the net. Are there more doors?

Back up the trail. People were setting up plastic chairs—a wedding. I’m told the bride sometimes walks down the lighthouse steps to her awaiting groom. An imaginative wedding. Not a match.

I found no other doors. I had a meeting and it was time to go.

While there, I never opened the door. I never even thought about it.

Later, though, I looked at the pictures. If opened, would I have found a garden? A Mad-Hatter? A white rabbit?

Why was the doorframe broken? Perfectly Imperfect? A fairy didn’t need a ladder. Neither did a rabbit. Actually, they didn’t need a door, for that matter. Was the ladder a swing for something really small? If so, how did those tiny whatnots reach the doorknob?

I, of course, settled on the idea that the door was crafted from human hands, driven by imagination and craft. Maybe a child spotted it and took it home. Maybe the carpenter took it back.

I imagine others finding similar doors. One with tiny shells at the Coupeville Wharf. One made from yarn in Oak Harbor, or chocolate in Langley, or sea glass washed up on the shore on Cama Beach.  Maybe an upcoming art festival will yield a clue.

The artist was a trickster, alright. Incongruent, yet belonging, the door was a treat, a tease, a trigger.