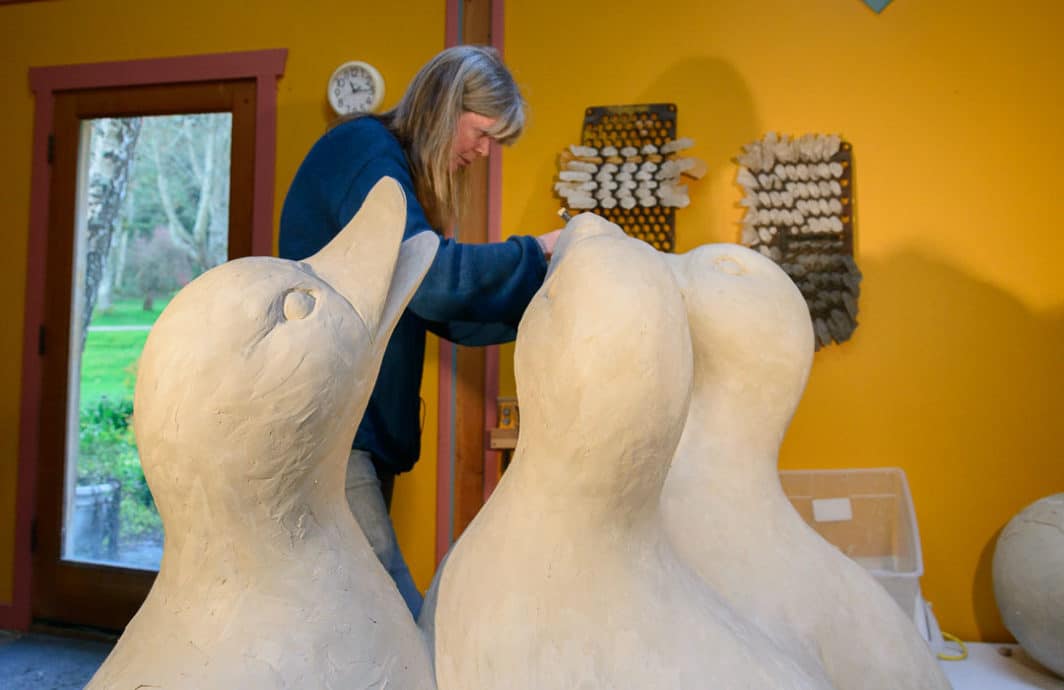 Like the island she lives on, Georgia Gerber is a bit of an enchantress.

People are a little less serious when they’re around her work. The sculptures of oversized ducks, or kids, or dogs, or whatever, just seem to bring a sense of fun and wonder out in people. 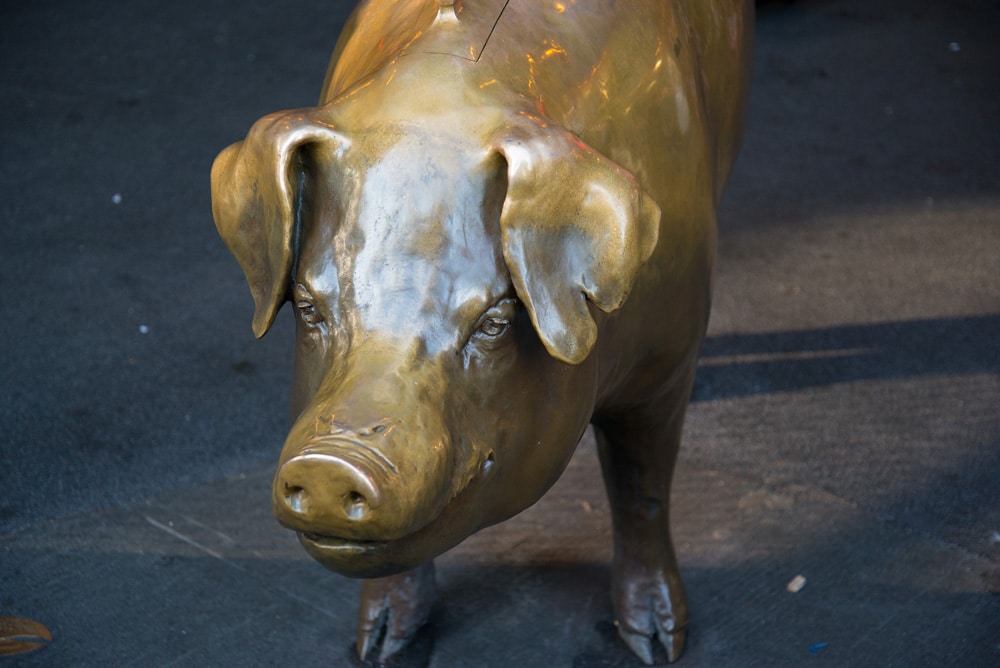 Take Rachael the Pike Place Market pig, for example. Rachel is touched, petted, patted, ridden and photographed all day, every day as she successfully competes for attention with the noisy fish-flingers just a few feet away. Just looking at the pig makes children smile. Adults are not immune to a few silly grins, either.

Rachel was one of the earliest and possibly best-known works for Gerber, who smiles and says, “I didn’t know it was going to be this popular,” adding, “Sometimes you just forget its yours. It’s just become now a Seattle piece.”

Shortly after earning her Master of Fine Arts degree from the University of Washington, Gerber chose Whidbey Island for her studio and foundry. Whidbey is home to many artists who find the unique blend of small town and rural landscape, only a few miles from a major city, to be the perfect atmosphere to inspire creativity.

“Being an artist on Whidbey, I feel part of a very strong art community,” Gerber explains.  “Everybody being excited about art can sort of fuel your own fire for it.” Visitors can fuel their fire as well with galleries, public art, festivals and tours throughout both Whidbey and Camano islands.

Her studio is a study in whimsy but ordered, businesslike and prolific. On this day, she began by inspecting the surface of a small clay sculpture of a rabbit standing atop a tortoise, using a metal tool to delete tiny imperfections that might cause issues later.

From there, she moves to the day’s main task, further work on three massive ducks, their bills raised up in song. With heads three times that of a person and duck bills the length of someone’s forearm, the sculpture rests on a special table that can be raised and lowered to give Gerber easy access to everything from webbed feet to those upraised bills.

In an adjoining room, a menagerie in bronze is ready to be sent to their various final public installations. Two giant rabbits will be heading to Kansas City, while a bronze dog named Bowser is waiting for his new home in Seattle. 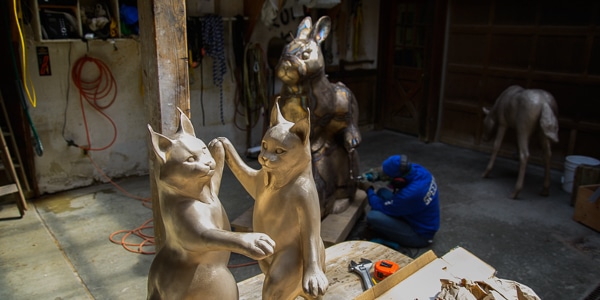 Bronze sculptures appear to play as Georgia Keck smooths out imperfections in a recently-cast sculpture.

Although her studio isn’t open to the public, tourists can easily see, touch and pose with her work, many of which are on Whidbey. Langley’s “Boy and Dog” on First Street may be her best known on the island. Instead of posing the boy on the street, he’s doing what anyone might, leaning against a railing, looking out at the water. Gerber envisioned the unusual situation of having a statue with its back to the audience. Only the dog at the boy’s feet looks back at the street.

On Oak Harbor’s historic Pioneer Way, three ducks appear to be running down the sidewalk. The trailing duck has tripped, doing a face-plant (er.. beak-plant) into the sidewalk. 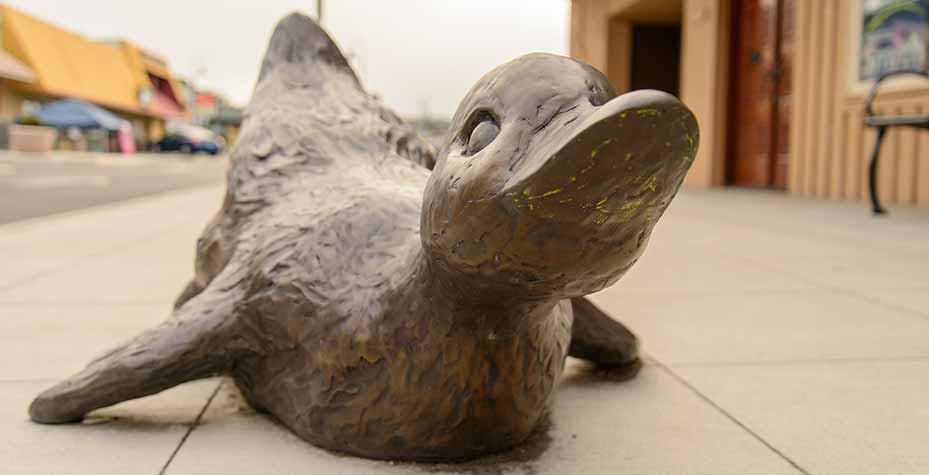 A duck appears to be doing a belly flop in this bronze sculpture by Whidbey artist Georgia Gerber.

Outside of Whidbey Island, a black bear with cubs stands guard outside the REI store in Tokyo, while a sculpture of a teenage girl with her arms around her dog greets those entering The Virginia Technological Institute’s Veterinary Teaching Hospital. Thirty-one Gerber sculptures, including a full-scale bronze lunch counter complete with customers, liven up a street in Wichita, Kansas.

The style of her public art is distinctive, of course, but more so is her artistic attitude that her art isn’t something that belongs on a pedestal, but rather something with which the viewer can interact. For example, people can lean on the rail with the boy in Langley or have lunch at the lunch counter in Wichita. She says she “likes working with a site in a way that has the viewer become a part of it.”

An example of whimsy on whimsy is a large sandbox in a park next to the Clinton Ferry Terminal. The park is “play-ready”—complete with toys. But at the edge of the sandbox stands a mother otter with her youngster. It’s at small child level, just waiting for curious hands.

Gerber is quick to point out that the sculptures are the work of a team. Georgia Keck has been with her since 1983. While Gerber is working with the clay, Keck is armed with anything from power tools to welding torches, assembling the pieces into the full sculpture and smoothing the surface to its ultimate texture.

Her husband, Randy Hudson, is responsible for applying the final surface, or patina. He also does everything from the business end to getting the massive sculptures ready for shipping. 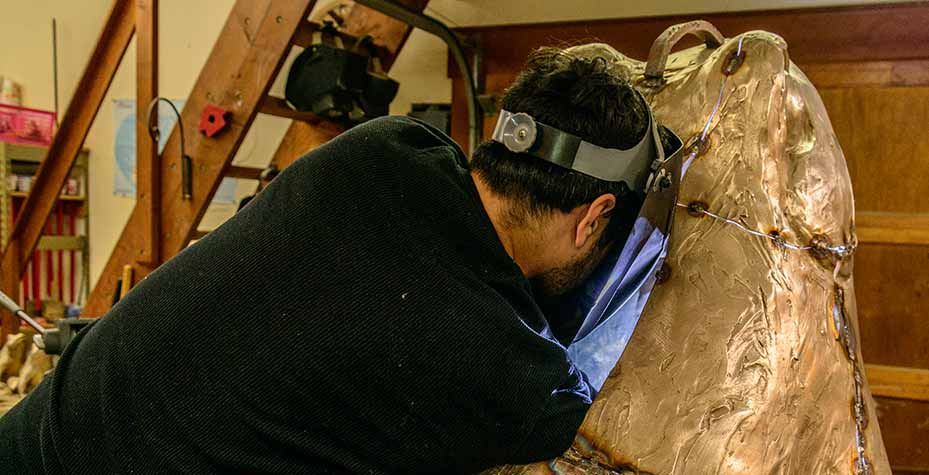 Victor Ramos welds together pieces of a giant frog.

Her son-in law, Victor Ramos, is also in the business, welding pieces together. This day finds him headfirst into the back of a giant frog, his welder’s mask reflecting sparks from his torch. Viewed from the outside, the giant frog looks like a glowing alien.

Her daughter Laura Hudson’s artistry has taken a different direction, painting, and she works out of a nearby building to create a style that will add to Whidbey and Camano Islands’ rich artistic tapestry.

Gerber has reached the age where her friends have started to retire. Asked about her own retirement, she says, “I can’t imagine not coming down to sculpt up until the very end, because… it feeds the soul.”