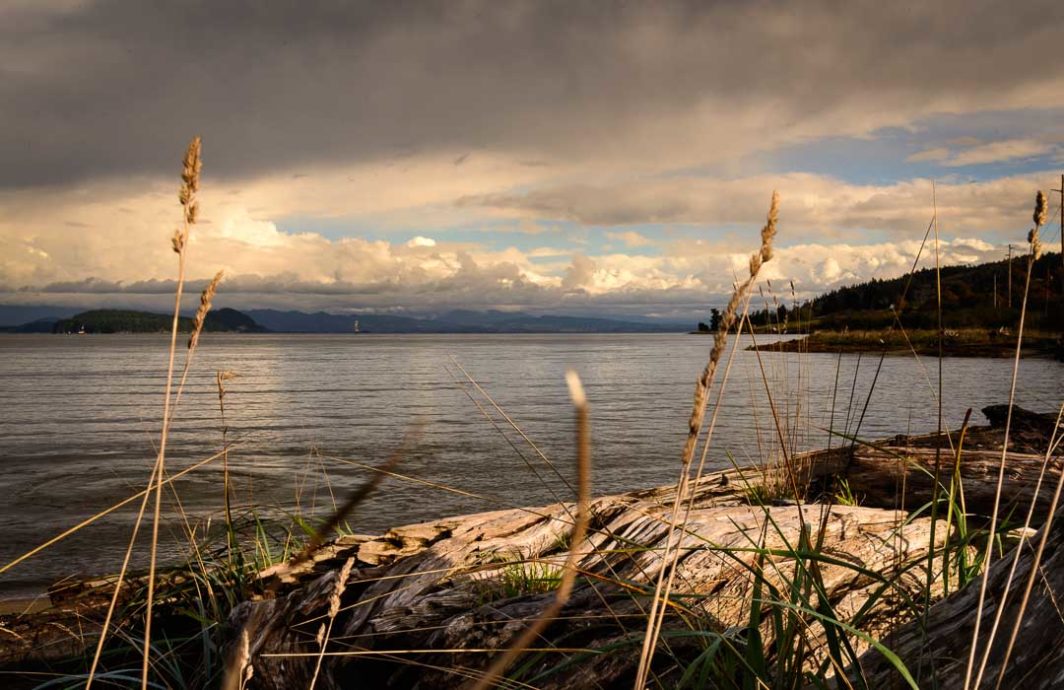 In the fall, beaches are often a place for quiet contemplation, making the beaches at Dugualla Bay the perfect choice for Our Best Beach This Month.

It was one of those fall days that started slate gray, but ended in spectacular sunshine. The blue-gray clouds backed away to the east, surrendering the western sky to an afternoon of reds and yellows.

Beneath that sky, spread out before me, was Dugualla Bay. The beach was a jumble of driftwood, grass, rock, and sand.

To someone whose idea of a beach is limited to expanses of sand, this beach will stretch you a bit. It’s a busy place with hiding places for frogs, driftwood bird perches and, just off shore, eelgrass for young salmon to hide in as they get accustomed to life in salt water. The sunny sterility of tropical beaches is here, a jumble of nature with untidy hidey-holes for nature to thrive.

To Get to Dugualla Bay…

Take SR 20 north from Oak Harbor about 2 miles to Frostad Rd. Turn right and drive .9 miles to Dike Road. Turn left and travel about .4 miles to a safe pull out area. The pull-off south of the dike is on private land, so don’t use it.

For me, it was all about the afternoon light warming up what had been a chilly day, and I was out to see how it looked through my camera. My vantage point was a small pullout along the dike and right behind me was a pumping station used to keep land behind the dike dry. That was important, because my guidebook said another pullout to the south was on private land.

When I arrived, some ducks backed off, giving me a wide berth. However, they kept flying by, apparently anxious for me to be elsewhere. A few hundred yards away an eagle was using a power pole as a perch. He was well out of camera range, forcing me to settle for those impatient ducks. 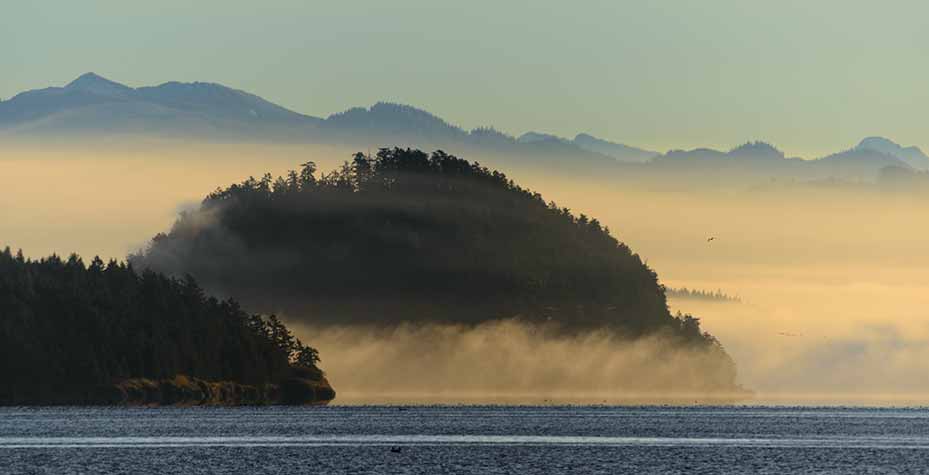 Fog surrounds Goat Island to the east of Whidbey Island

This wasn’t the first time I’d been here. Last winter I had been seeking morning light, and found fog surrounding Goat Island. Typical of sunny winter days around here, the morning sun backlit the fog creating an ethereal scene. Taken together, they showed that, around here, the same places can be so different as the weather changes.

There are actually several small public access points along Dugualla Bay. The are small, with parking for only a handful of cars. Because of that, they’re not big tourist destinations. Instead, these spots are where locals stop, generally to be alone with nature for a while.

There is a Dugualla Bay State Park, but, as of now, the park is closed to vehicles and it’s a 1 1/2-mile walk to the shore. And, while the clouds made for great photographs, I was not convinced they were going to let the sun keep its precious sky. I’ll have to save it for another time and another Beach of the Month.