One of our more unique state park features is the underwater dive park and marine reserve at Fort Casey State Park.

There’s a part of Fort Casey State Park that most of us won’t visit. There are no “No Trespassing” signs or fences, or “Members Only” warnings, yet we’re barred from entry simply because we don’t know how to get there. I kind of envy those who go there, although I doubt I’ll join them. It actually took a dozen trips there to even see from a distance what I was missing.

As humans, so much washes past us that we never notice. Eventually, however, something clicks. Maybe in that moment we let our guard down, ignored the impeding deadline, or when our brains were momentarily in idle, we finally noticed something that had been there all along.

Most recently that happened for me as I drove into the parking lot east of the Coupeville ferry, still a part of the state park. Usually, my focus was on the ferry, as I thought it was this time; gleaming its characteristic shades of green in the morning sun of the first day of a new year. It was a nicely sunlit view of the ferry, great for photographs.

To Get to Ft. Casey Underwater Park…

Take SR 20 south from Coupeville to where it intersects with SR 525. Turn left and continue on SR 20 for 3.2 miles. The parking is on your left just before the ferry holding lot.
NOTE: Parking is $10 or a Discover Pass, good for a year at all Washington State Parks.

But, there was a momentary distraction; a sign telling me about an area I hadn’t seen, and likely would never see. What was this “exclusive” part of the park? It’s the underwater-protected dive park at Keystone spit, and it, along with the beach we all can visit, is our January beach of the month.

Much of the lot is for trucks and boat trailers, but I parked at the far end of the lot next to the beach. I needed only a few steps to reach where I could take in the panoramic view of Admiralty Inlet. The sunny skies bathed the distant Olympics in a crisp winter light, defining it a bit more clearly than during the summer months. 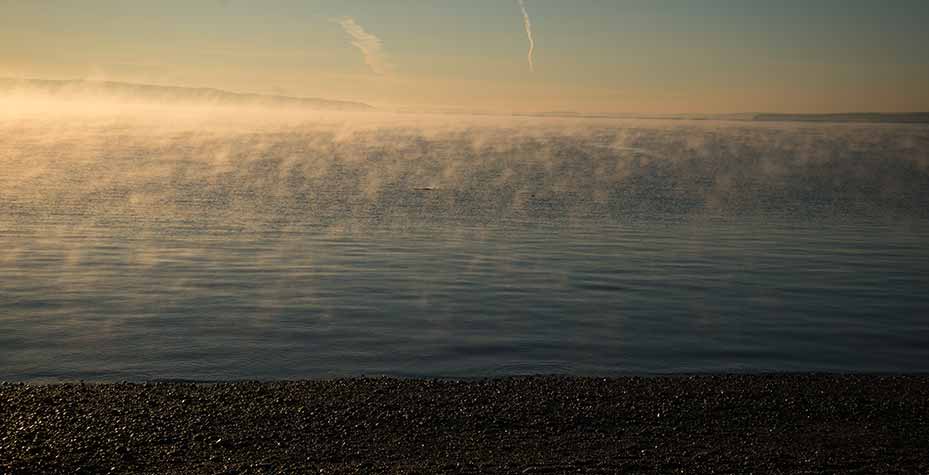 Water evaporates from the sea as appears to be boiling.

Some interpretive signs identified this stretch of beach as the “Fort Casey State Park Marine Conservation Area.” I had heard of it, a protected marine park for scuba divers. On this somewhat chilly January morning there were two groups of people already there. One group had dive gear on a picnic table, but seemed content to enjoy the view and their dogs. The second group, a couple, was carefully suiting up to head into the water.

I don’t scuba dive, and this is my loss, of course. The interpretive signs described the wonders beneath the surface and a few photos teased me with what I might see. The couple had gotten into the water and were going through what I assumed were some final safety checks. She had a complex underwater camera complete with lights. I speculated as to what wonders she might record.

I watched, contented with a sunny terrestrial view. This area is unprotected against the seawater of the inlet, so driftwood is plentiful. Trees floated here from who knows where. The ones with roots you knew had tumbled into the water, perhaps part of a great storm. Others were worn at the ends as though they had traveled a great distance and the seawater had scoured the ends round. 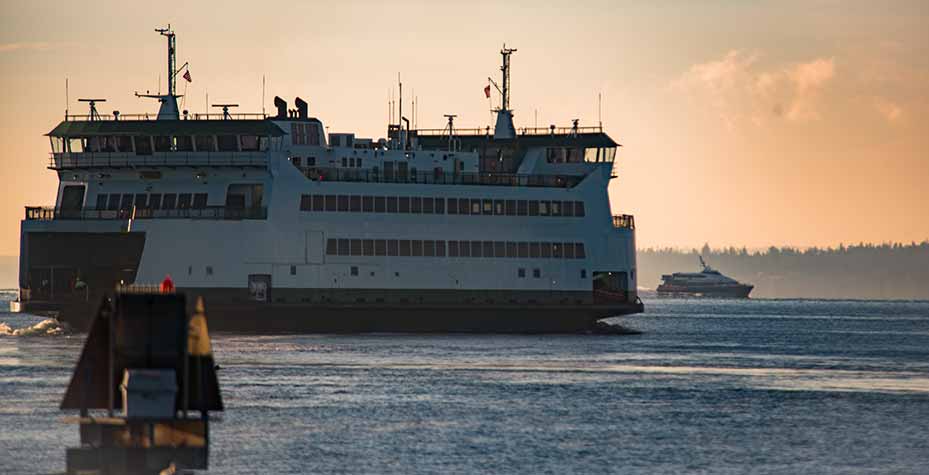 Although miles apart, in this view the Victoria Clipper appears to be leading the MV Salish through Admiralty Inlet.

On the other side of the terminal is an RV park. Yes, an RV park with a water view! Even in January, those choice spots were full. I noted to explore it more thoroughly some other day.

The ferry MV Salish pulled away from the terminal, heading across the inlet for Port Townsend. Far in the distance the Victoria Clipper was roaring through on her way to British Columbia. From this vantage point all manner of vessels sail past. From military and cargo, to pleasure and cruise ships, time your visit right and there’s a maritime education on parade.

Today, however, the only education available to me was finding the place, of noticing what had been there all along. And, that was enough.