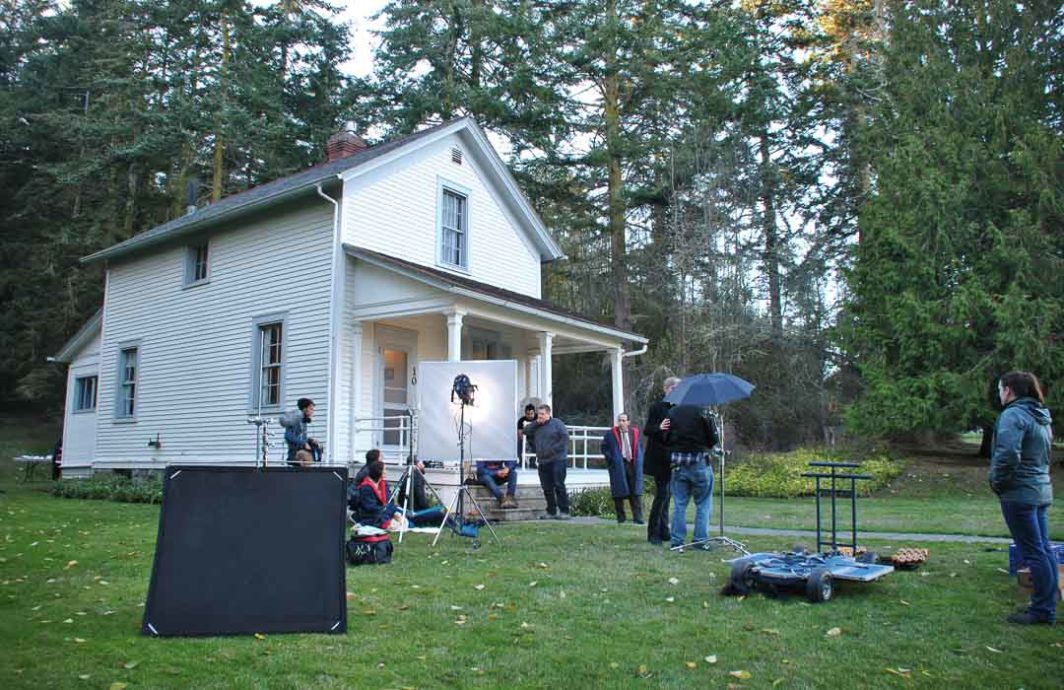 "In my mind, 'The Hour After Westerly' and Whidbey Island are inseparable."

Yet another crew has wrapped up shooting on Whidbey Island.  This time, independent producers from Los Angeles finished principal shooting in Central Whidbey for the short film, “The Hour After Westerly.”

The film stars Peter Jacobson and Shannyn Sossamon.  Jacobson is recognizable from roles in many TV shows including House and Colony. Sossamon was Heath Ledger's leading lady in A Knight's Tale.

The film was written, produced, and directed by two friends, Nate Bell and Andy Morehouse. It is expected to be released later this year. 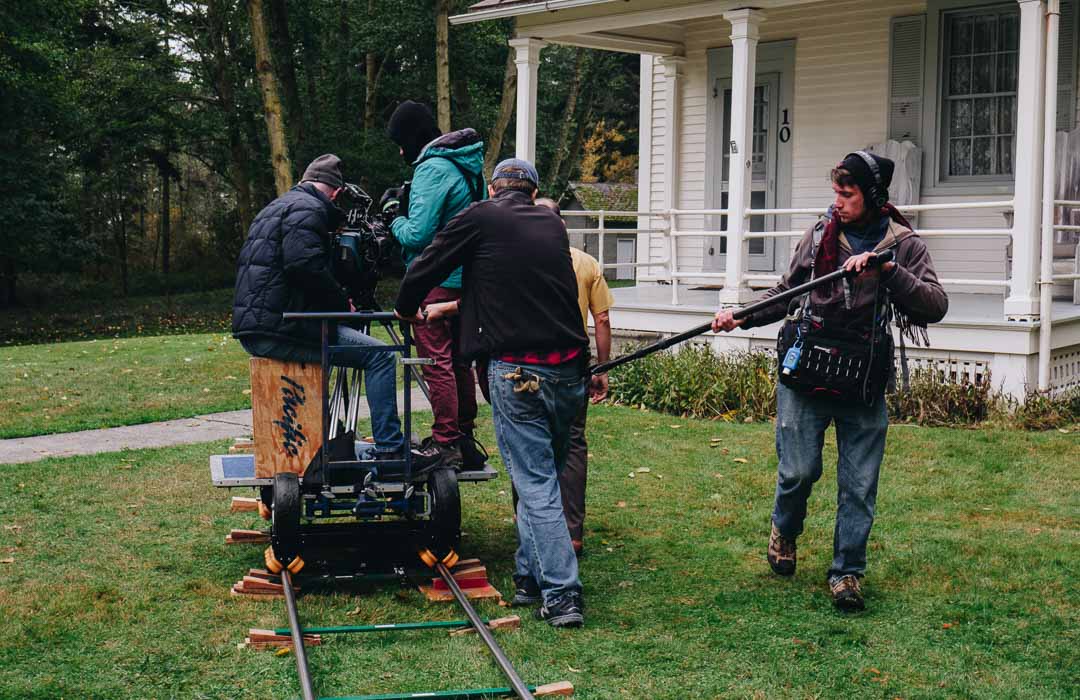 The crew uses a dolly to capture actor Peter Jacobson walking across the lawn at The Fort Casey Inn. Photo: Wes Anthony/Firehouse Creative

"The austere beauty of the landscape, particularly Ebey’s Landing, attracted us to the island, " said Bell. "The look and feel of the Pacific Northwest has a charm that’s distinct from any other place in America."

Based on a short story by Robert M. Coates, the tale is about a traveling salesman who realizes he's lost an hour of time while driving a lonely stretch of road. Later, he's haunted by visions of a town, and a woman at a cottage, that may hold the key to the mystery. It first appeared in The New Yorker in 1947. 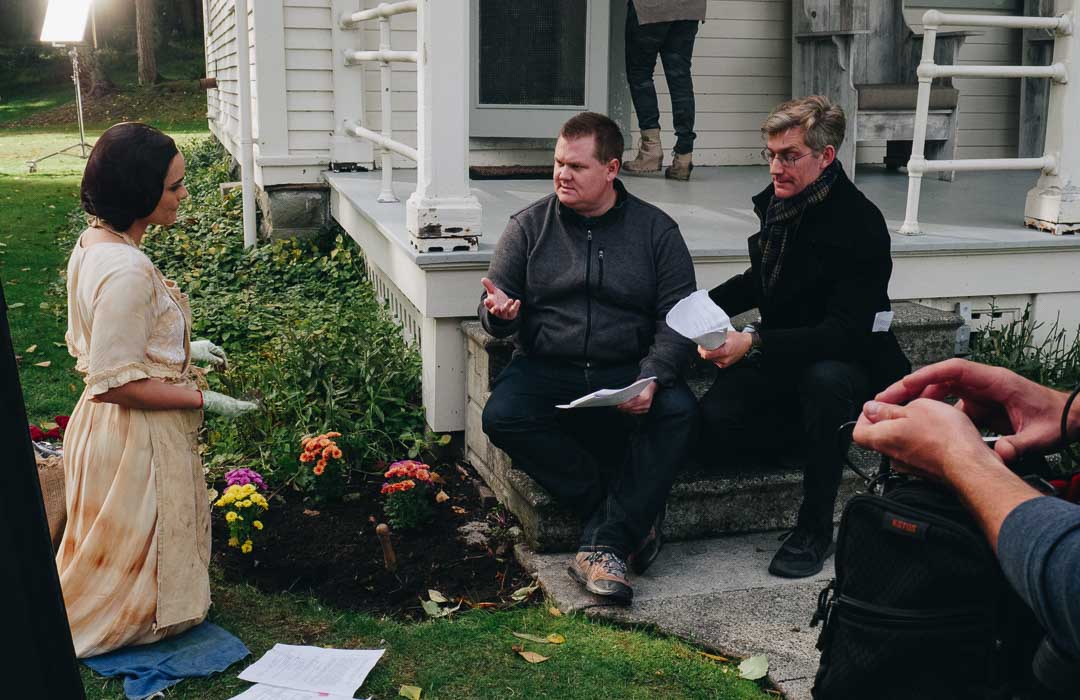 Both Whidbey and Camano Islands are popular with a variety of commercial productions. In the past year alone, county film liaison Sherrye Wyatt has worked with crews representing Nissan, HGTV, Nike, and Nordstrom.

"It’s very different from L.A., where everyone seems to be annoyed by your presence," said Bell.

A $50 contribution by March 9 to the Kickstarter campaign earns a seat at the premiere in Los Angeles.

We sat down with Nate Bell to learn more about The Hour After Westerly:

Q. How did this project come about?

A. The short story came to me almost ten years ago. My friend, Adam Walter, an extraordinary bibliophile, introduced me to it. I always thought it would make a great short film. I developed the story with my wife, Emily, then wrote a script with Andy, my creative partner. Although we worked on it sporadically for years, plowing through 16 drafts, we were only able to gather the resources to produce it in spring 2018. That’s when we kicked everything into high gear.

Q. Why did you choose Whidbey Island, WA to film this short movie?
A. The austere beauty of the landscape, particularly Ebey’s Landing, attracted us to the island. We were looking for a location that could pass for New England, where the original story takes place. The look and feel of the Pacific Northwest has a charm that’s distinct from any other place in America, so even if it doesn’t convincingly double for the Connecticut coastline, at least we have the benefit of some very beautiful scenery. Our director of photography, William, took full advantage of our surroundings. 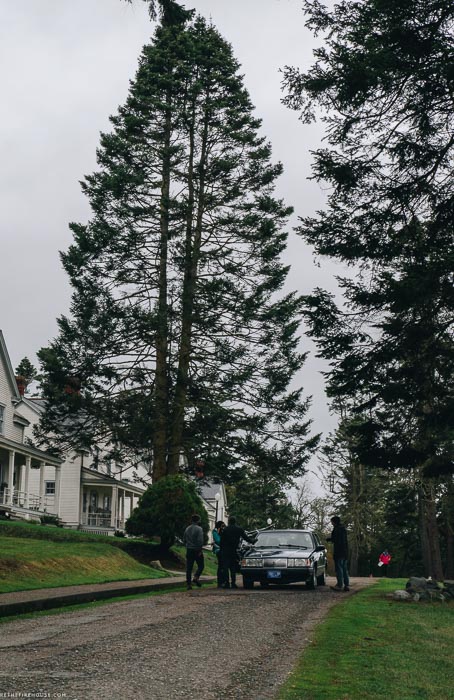 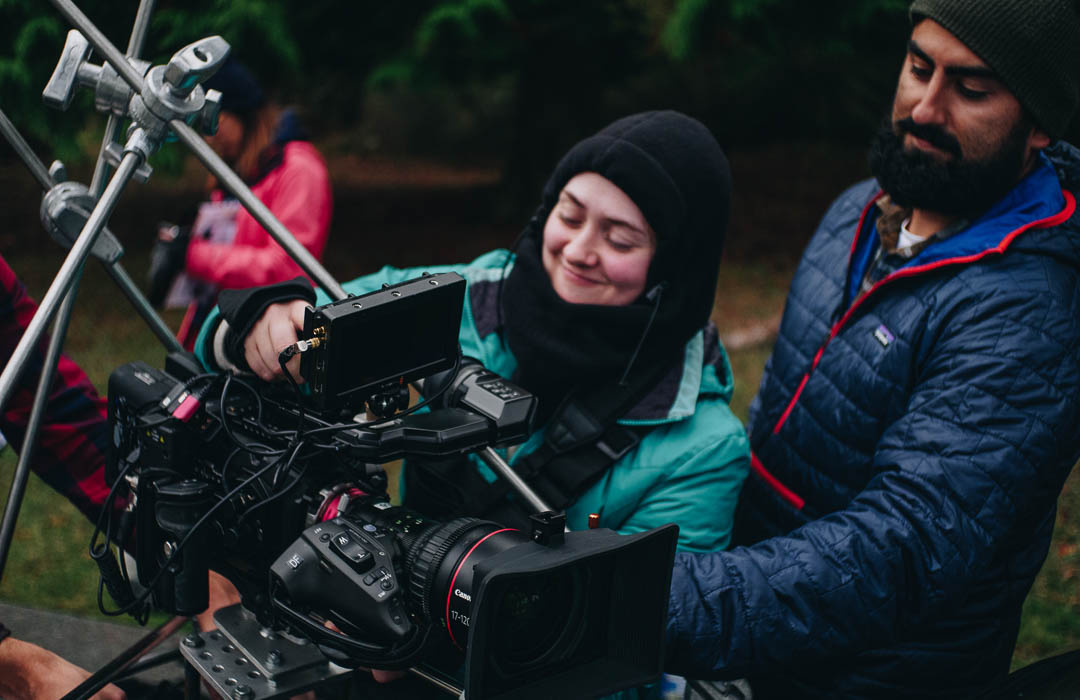 Getting the camera in place. Photo: Wes Anthony/Firehouse Creative

Q. What is "The Hour After Westerly" story about?
A. The Hour After Westerly is about a traveling hardware salesman, Davis Harwell, who has a strange experience coming home from his sales route one evening. As he drives along a stretch of road, he experiences an incident in which everything suddenly looks unfamiliar to him. Glancing down at the dashboard clock, he realizes that he has “lost” an hour with no recollection of what happened to him. Later, he’s haunted by visions of a town—and a woman at a cottage—that may hold the key to the mystery.

Q. Why was this location (and timing of shooting in autumn) perfect for this "ghostly" story?
A. There’s something about a lonely road that evokes a sense of mystery and expectancy, especially during autumn, when you can almost feel a spectral presence coming over the landscape. The original story by Robert M. Coates—a master of mood—seems to lend itself to this peculiar time of year. It’s beautiful, and a bit eerie.

Q. What are your personal connections to the island?

My wife’s parents moved to Coupeville about five years ago. My father-in-law, Steve, was an indispensable contact for our shoot, meeting with private business owners, securing a picture car, and even finding local actors for our film. Willy Wilhelm, who plays our gas station attendant, was recruited by Steve.

Q. How would you describe you experience filming here including the local community, weather, things in general?
A. The weather was difficult, to be honest. We were hoping to catch some fog for some of the more atmospheric scenes, but instead we got rained on. Thankfully, that only lasted about a day, more or less. We were blessed with terrific weather for the most crucial three days of our shoot. We prepared to continue in the rain, but naturally, we were relieved when the weather cleared up. Our assistant director, Julianna, made sure everything moved at a solid pace. The local community showed us tremendous support. The city, county, and state authorities, Coupeville Auto Repair, and especially Camp Casey helped us facilitate a challenging shoot. People were delighted to have us film there. It’s very different from L.A., where everyone seems to be annoyed by your presence.

Q. How was the experience working with the film liaison officer and her staff ?
A. Sherrye Wyatt and Laura Hilton were brilliant to work with. They scouted locations for us, connected us with a hair and makeup artist, found us productions assistants, and made every effort to ensure our actors were comfortable during their stay. Plus, they brought gift baskets for everyone, which was incredibly nice!

Q. How did the stars feel about Whidbey Island?
A. Peter and Shannyn enjoyed visiting the island immensely. Peter, a New Yorker, even stayed for an extra day so he could explore the island. He was captivated by everything.

Q. Where were the locations that you filmed and that we will recognize?
A. Locals will immediately recognize Admiralty Head Lighthouse, which figures prominently in our script, as well as the historic Ferry House, which makes a cameo appearance. But the location we hope will make the strongest impression is Fort Casey Inn, with its row of old cottages that can be charming or spooky depending on the context. Robyn Myers worked with us closely on securing this important location, even allowing us to slightly modify the grounds of the “Doctor’s House” which became a significant part of the visual design of our film.

Q.  Anything else want to add?

A.  In the best movies, the locations are used like characters in the story. We hope that’s true of our short film. In my mind,The Hour After Westerly and Whidbey Island are inseparable.