How could early explorers be deceived that this sea canyon was the mouth of a river?  It’s easy to understand when you take the time to watch and listen.

If you arrive at the right time, you’ll hear the deception begin. Subconsciously, at first, but then the sound breaks through and you’ll recognize that something’s different. But, to even have a chance to hear the deception start, you have to break away.

Tourists love Deception Pass. Over, under and around the bridge they go, and confirm to themselves that the view is beautiful and the bridge is amazing. Camping, beaches and lakes at the state park offer plenty for people to enjoy.

The deception is, famously, how the tides force water through the pass at such rates that early English explorer Captain George Vancouver thought it was a river.

The deception snuck up on me as I was taking early morning pictures. Before sunup, I walked the Goose Rock path.  The cool fog of morning was heavy and hiding the water. I found my spot and spent time waiting for sunrise by taking pictures of Strawberry and Ben Ure, the islands just east of the pass. 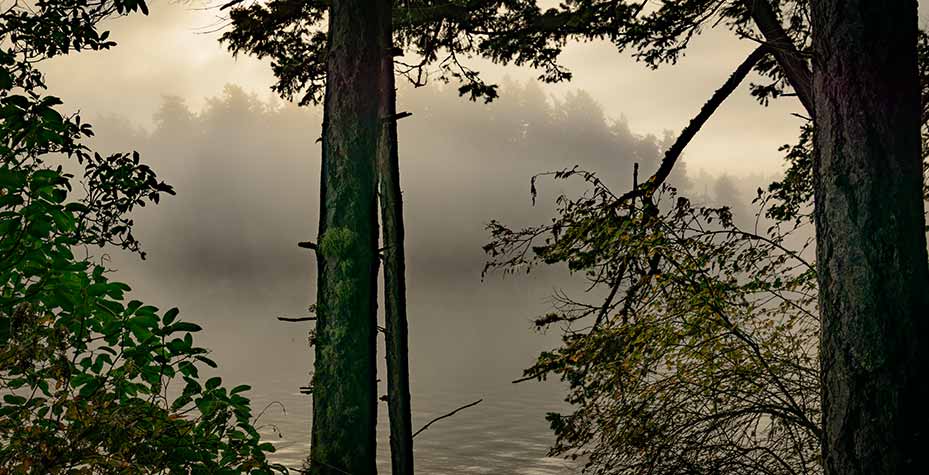 A fog-shrouded Ben Ure Island sits in the middle of Deception Pass.

I wasn’t at the water’s edge, but at a vantage point several feet above the water. Getting all the way to the water, as I had once done years ago seemed too risky on older knees.

I concentrated on the fog, and embraced the silence. I composed my shot, pressed the button and re-aimed my camera.

The sun broke through the fog, providing a perfectly diffused light on the two spans. Fog and light fought over the bridge, but neither gained an upper hand. I recorded the event, wondering what magic light might come next.

Then, I realized the silence was gone. Like a waking bear, slowly and lazily starting to move after hibernation, the water and begun to flow and it sounded like a nearly flat river, moving just enough to not be a lake.

Over time the noise built and the water flowed faster. No longer a lazy river, the water moved in earnest, more like a mountain river tumbling past logs and rocks.

And, so began another cycle of deception at Deception Pass.